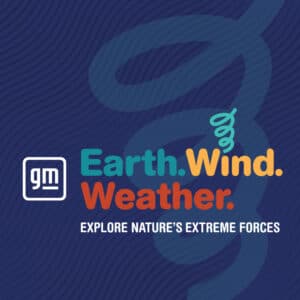 Earth. Wind. Weather. is included in the general admission price and is a part of MiSci’s new virtual field trip program with select classrooms in Detroit Public Schools Community District (DPSCD). DPSCD third through fifth-grade students can connect with MiSci Distance learning educators for a live, virtual tour of the Earth. Wind. Weather. gallery, which connects to each grade level’s earth and space science curriculum. Students will suggest ways for the educators to interact with the gallery exhibits on camera, play games and participate in experiments about weather, natural resources and the forces shaping our planet. Virtual exhibit tours are reserved for DPSCD third through fifth-grade classrooms only at this time, thanks to the support of General Motors.

This experience will help learners of all ages understand how STEM concepts that shape our world, as well as highlight potential career paths in meteorology, oceanography, astrobiology and geology. Relevant STEM learning, including engaging with real world phenomena like weather and climate, helps students connect more deeply with underlying science content and relate those connections to the world at large.

Earth. Wind. Weather. is immersed in an aural soundscape featuring recordings from National Parks across America due to a generous donation from Harman International

Earth. Wind. Weather is brought to you by General Motors with additional support from the Zatkoff Family Legacy Fund, Harman International, and PLEX Systems Inc.

Ten Immersive Exhibits to Fascinate Everyone

Tornado uses a large mist generator, fans and a 12-foot structure to produce a large tornado. It is intentionally de-tuned so that random air currents can cause both the creation of a tornado and its temporary cessation. The Tornado is chaotic and unpredictable much of the time, wandering off the source of the mist, slipping out of the grasp of the shearing winds and presents a delightful and ever-changing spectacle.

Aeolian Landscape presents a swirling storm of sand inside a large chamber covered by a Plexiglas top. A knob on the top of the exhibit rotates a sturdy fan set in the chamber’s base. As you turn the fan, the sand inside begins to swirl and accumulate in patterns suggestive of a desert landscape as if seen from high above. Geologists use the term “aeolian” to refer to land formations created by wind, like dunes and snowdrifts. Visitors can change the fan’s direction and notice how the shape of the miniature dunes influences the wind pattern, which affects the formation of the dunes.

Rift Zone uses air bubbling up through fine sand to suggest a small-scale geothermal landscape. By pushing a button, learners can release pockets of air that erupt through the sand and alter the landscape’s shapes and patterns. The aerators that activate the sand are arranged in a composition of three elements: a circle, a line and a dot, corresponding to the three kinds of rift zones that occur on Earth: solitary volcanoes, fracture zones such as the one spreading on the island of Hawaii, and the ring dike that forms in the crater of a volcano as the central plug cools and then a new eruption occurs around the perimeter in a circle.

Sea of Clouds creates a large pool of slowly undulating fog evocative of Jupiter and Venus’s cloud tops and condensation forming in the valleys of Mars. Generated by an ultrasonic fog machine, the cool, dense water mist flows like dry ice fog. The top surface is alive with waves and complex convection currents. Viewers will be able to run their hands through the fog and alter the currents. When left undisturbed, the fog will slowly churn and change due to its internal dynamics.

Turbulent Orb is a half-meter diameter sphere full of special, colored, flow-visualization fluid. The sphere is mounted on top of a pedestal. Visitors grasp a metal ring on the pedestal and spin the sphere choosing the direction and rotation speed. The fluid in the globe shows swirls reminiscent of the turbulent flows in planetary atmospheres.

Confused Sea mimics the wind’s action over the ocean by generating waves created with air blowing over the surface of water inside a large plastic hemisphere. The waves slowly change and build until the entire volume of water is circling as one wave. Visitors can adjust the speed of the air blower and influence the waves.

Geyser is a working model of a natural geyser. A large bowl of water is supported over a long, thin tube that runs down to a glass chamber filled with water heated by a heating element. As the water in the chamber begins to boil, air and water are shot up the tube into the air. Cool water drains back down the pipe filling the chamber, and the cycle begins again.

Avalanche explores order spontaneously arising from chaos. The exhibit consists of a wheel that turns a gear that is attached to a pole that tips a large dome of sand back and forth. As you spin the wheel, the plane that bisects the globe changes the angle of incline. The sand inside the globe falls according to the angle that the plane is tilted at, simulating conditions that might cause an avalanche on a real mountain. The plane is also dotted with dime-sized holes that can be opened or closed by turning corkscrews on the outside of the acrylic globe. If the holes are opened, sand drains from one side of the globe to the other, simulating what might happen to granular land cover if there is a sudden sink hole or snow compaction.

Fluttering Silk is a constant stream of air over a lightweight piece of free-flowing fabric that cascades up into the air. The normally invisible air current is suddenly transformed into a colorful visualization of the air stream’s complexity.

We are here for you.

As we progress forward, together as a community, MiSci reminds everyone to continue practicing everyday preventive actions to help avoid illness. Learn more about what MiSci is doing to guests and employees safe.

In an effort to bring something new and immersive to you every day during this time, we have switched to a virtual presence as we work to safely open up the building for you, our MiSci family. Check out our ECHO Live program weekdays at 2:30 p.m. on our Facebook Page.